Thoughts on the Anniversary of People Power I 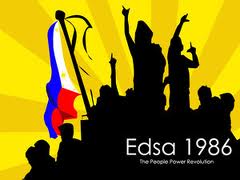 (written as a comment to Parody of People Power by M. Ressa)

This article was quite thought-provoking for me and made me think hard about the questions raised here and in other articles about the 1986 movement.  While I wax ambiguous on many points and vacillate between this opinion or that, there is one thing I am , in my own mind, perfectly sure about.  There is no worse time in modern Philippine history than that time of the Marcos regime.  It  was the darkest, most hopeless, hapless, horrifying time where people were not only hungry, they were mute.  They were not only poor, they were inutile.  Many of  those that were in relatively better posiitons were not only nonchalant, they were downright apathetic. Those times, in Lacaba's words, were "days of disquiet and nights of rage."  For amid this impotence and muteness and apathy, there were voices of disquiet , raging spirits that oppression could not kill, lamentations in the form of music and poetry inspired by murder and the crushed spirits under the boot of the dictator.


A university student in the 1980s, I had lost alll hope in a democracy or even to see a semblance or a shadow of the will of the people. I lamented and raged during the summer I  spent in Smokey Mountain; that night at the wake of my murdered friend and mentor Leandro Alejandro; those sessions hearing about Macli-ing Dulag or about the regions that have become totally militarized and  no-man's lands; that time  Dr. Bobby de la Paz was gunned down in broad daylight for practicing Medicine non-profitably  (and therefore subversively, in the regime's eyes) in the hinterlands of Samar.


Then came People Power.  There is no more powerful force than a people that has finally found its voice.  There is nothing more vile than the dictator who bullied his people into believing that their voice is of no consequence.  There was hope and freedom and opinions both agreeing and dissenting; there were voices,loud,audible,common.   At EDSA, in 1986, I fell to my knees and wept, hearing ,finally, my people's voice for the very  first time.


But did EDSA solve all that ailed the Philippines?  Certainly not.   For one, this chance for democracy came to a people with very little experience of it, coming out of years of colonial rule and with very little time to fashion the kind of democracy that was right for this country.  For another, the promise of democracy comes to a people very well-schooled in the pedagogy of  the oppressed (to borrow Freire's words).  The work of democracy is work enough to those familiar to it.  It is extremely perplexing to those  who are unfamiliar.

The work of democracy is a work of a people that is self-willed, self-directing and aware of the demands on each and every citizen.  It is by the people.  How strange a concept  to a people learned in the lessons of abandoning their fates to the whims of a colonial regime or entrusting the well-being of their nation to one ruler or just a handful of them. How strange that we have become co-creators in nation building;  that we can stand and ought to stand in defense of what is right and just;  that we have a reponsibility to uphold truth and demand transparency from our government.  How strange that we finally have a vote that counts for something (which we then must cast wisely) and a constitution that we must uphold.

Why have we time and again tried to re-create people power?  Because it is the only thing that worked!  It is our only experience of success.  The rest has been terribly difficult and messy because democracy is messy.  Democarcy requires time and the patience of more than 25 years.  It requires trusting the people's vote and the people's voice no matter how ridiculous it may seem to some.  It requires we trust our institutions as we try to improve them and make them better.  It requires that we participate, have opinions, critique ourselves as we do our government. It requires that we own our destiny as a nation and remain hopeful and confident that we will prevail. Every decision made henceforth, every mistake, every success, everything will be lessons in democracy that will, in time, fashion that special brand of democracy suited for us, Philippine-style.