A Review of an OBIE Award Winning Play: Magno Rubio.

Another look at Magno Rubio
Playwright by Lonnie Carter
Based on a short story by Carlos S. Bulosan

The Romance of Magno Rubio is a play that romances the senses in order to reach deep to find the soul.

It engages the ear with the lyricism and rhythmicity of lines uttered in verse, at one point resembling the chant of ethnic drums:
Mag-no-Ru-bio. Fi-li-pi-no Boy

At another, percussioned by arnis sticks:
For every pod of pea I pick

One mil is what I earn

For every little mil, one word is what I buy

And still at another, lolling, quiet, reverential, as if a prayer, or the anti-thesis of it:

For the earth is not his

There is, too, the casual, inadvertent blending of ethnic instruments and the ease with which the characters go in and out of multi-languages-- English, Spanish, Cebuano, Tagalog -- and different regional accents.

Visually, there are many inspiring moments.  The movement and slapping of sticks accompany verses;
tak-tak-tak for a slow verse;
takatak-katak-katak for a faster terse verse.
The character Magno erupts into a sequence of stylized movements to depict his frenzy of picking and planting fruits and vegetables to earn more money for his Clarabelle.  Eventually, the movements actually become that of “eskrima” and “arnis”, a Filipino form of martial art.  A fight sequence between Magno and Claro transforms into a comical slow motion.  And most visual of all is the poignant solo dance of Magno with a chair: a ballet of man, chair and shadows in dim light.

Texturally, the paucity of props and stage does not keep us from feeling the fabric of the play.  On the contrary, the scarcity drives home the point of poverty, the material depravity, “the life of dogs and pigs and brown monkeys”.  One can almost feel the rough wood of the bunkhouse and the swirl of dust beneath the farmhands’ feet.  One can almost feel the sting of mosquitoes in the early night.

The characters are so close to us, the audience, separated only by strands of wire, making us feel, telling us, that, we, are all Magnos and Claros and Prudencios and Nicks and Atoys, all with our own personal Clarabelles…
From the stage we hear the imploring, Bulosan, in our collective unconscious;
If you want to know what we are,
Look upon the farms,
Or upon the hard pavement of the city.
You usually see us working or waiting for work,

And you think you know us but our outward guise

Is more deceptive than our history…

So Magno Rubio is a fable, a folktale.  It tells of a four-foot six-inch illiterate Filipino migrant farmhand and his ill-fated love for the blond, six-foot Clarebelle.  It tells the tale of the manongs in ’s farms and the plight of Filipino laborers in in the 1930s. 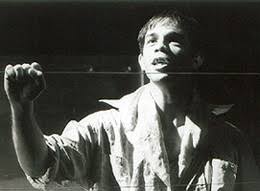 But like most fables and folktales, Magno Rubio tells more than it seems.

For there will be days when we will stand together

Fighting for our right to stand together,
I think they will understand why we should
Stand together in our time.

As Magno Rubio drags you through a gamut of emotions and makes you laugh and cry and angry and wistful as you move with Magno, Claro, Prudencio and Atoy through the scenes, allow yourself to celebrate your brown legacy, exult in your heritage; revel in the ancestry of your birth.  Feel proud, for when all things are said and done, flat noses, coconut heads, turtle arms all, size has got nothing to do with love.